During the early weeks of the COVID-19 Pandemic, Jacob and Alexandra Cohen began baking bagels, as their regular jobs as a realtor and an advertising salesperson -- and even their passion careers as a musician and an artist -- became suddenly less relevant. 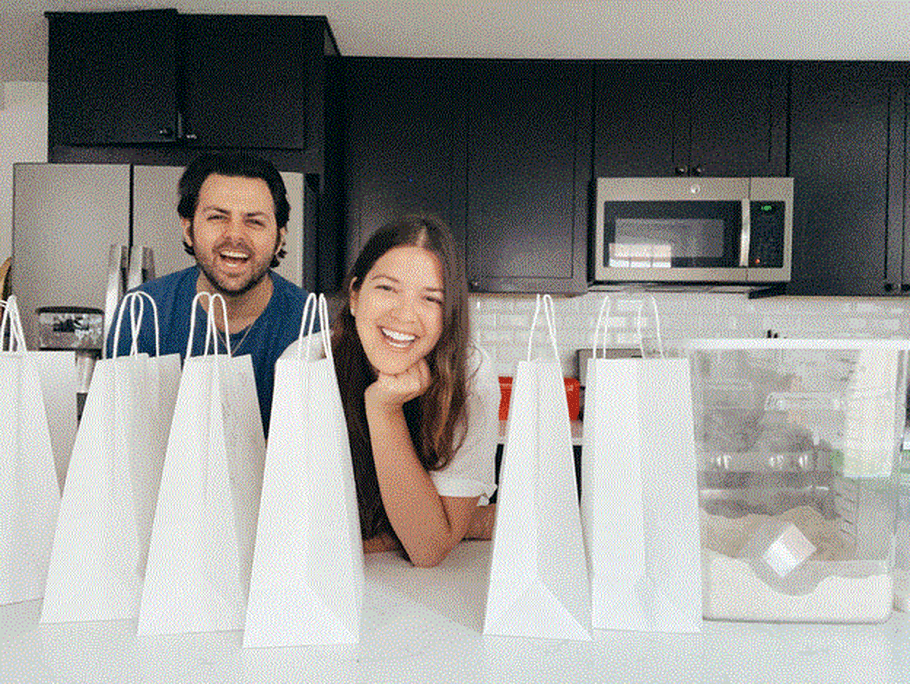 It started as simply a craving for great bagels, but soon became a way to get involved in the fight against the Pandemic, raising money for charities supporting those most impacted by the COVID-19 outbreak.

One post in a Northern Liberties Neighborhood Facebook page soon brought a flood of orders and donations from various Philadelphians all over the city. After an initial successful pop up at Urban Village Brewing in Northern Liberties, Jacob and Alexandra was able to raise $1200 which they donated all of to Project Home. That’s when they realized they were onto something special!

After numerous pop-ups and collaborations throughout the summer of 2020 at businesses such as Rally Coffee, Olly, Riverwards Produce, Somerset Splits, Tired Hands Fermentaria, and Steve and Cookies in Margate, NJ, Kismet Bagels is now being carried in various cafes around Philadelphia.

Not only are their various bagel flavors offered, but also their various homemade flavored schmears, as well as their "Slow Toasted" Everything Seasoning. Ultimately, Jacob and Alexandra see this as a Brand, not a future Bagel shop.

“We do not have any interest in the opening as a retail shop, preferring to focus on the combination of wholesaling to cafes and stores, as well as direct to consumer pop-ups,” says Jacob.

Kismet attributes much of its business expansion to a strong network of friends and family, and for a much wider larger audience, a very active Social Media presence.

Instagram (IG)in particular has helped Kismet Bagels grow so fast in such a short time. Their IG account was opened on May 1st, 2020, and already is now approaching 4,000 Followers.

Jacob and Alexandra are constantly speaking to their audience, sharing videos of their story, and giving updates, announcing their latest collaborations, like their new "Pizza Bagel" Kit with Freelance Pizza, or even a glimpse into the bagel-making process.

Come November 2020, Kismet Bagels will be moving from their shared commissary space at Liberty Kitchen in Fishtown to their brand new renovated and equipped commercial bakery facility at Maken Studios in Kensington, owned by Shift Capital.

Despite this venture blossoming from a small hobby at home to a full-fledged business, Jacob and Alexandra are committed to continuing to donate a portion of their proceeds to charity as part of their long-term business model.

In recent months they have raised funds for organizations such as Project Home, Black Lives Matter Philly, and the PPE Fund for Sanitation Workers organized by Terrill Haigler, aka Yafavtrashman.

Early on in their journey, Jacob and Alexandra made a decision to prioritize quality over cost and formed a strong relationship with a premier Pennsylvania flour mill, Castle Valley Mill in Doylestown.

Like Kismet Bagels, Castle Valley is owned and operated by a Husband and Wife, along with their children, which struck a chord with Jacob and Alexandra. The flour is extremely high in quality and incredibly fresh, milled right in Doylestown in a 200+-year-old Mill, and Kismet Bagels make the flour a feature of their bagels. (The flour also happens to be the first flour Jacob ordered during the quarantine and thus was the first flour Kismet Bagels were made with.)

As interest and orders have greatly increased, Kismet Bagels began bringing on staff to help meet larger demands. With Jacob's background in music, and Alexandra’s background in painting, they recognized the challenges facing musicians during the pandemic with no live music and touring work, galleries being temporarily closed, and have employed a number of musicians and artists in their kitchen.

They've also brought in people who lost their jobs in marketing, sales, and other bakeries and restaurants.

“Everything we are doing at Kismet Bagels is motivated by being able to help our community, connect and collaborate with other Philadelphia food businesses, and spread enthusiasm and love for our high-quality products,” says Alexandra.

Alexandra and Jacob Cohen met when they were five and eight years old, respectively, down the shore in Margate. Their grandmothers have been friends since the 1960s while living in Philadelphia. Later, coincidentally, Jacob's father hosted many parties in high school which happened to be attended by Alexandra's mother. Needless to say, Alexandra and Jacob's meeting were simply Kismet.

After losing touch for about 20 years, Jacob moved back to Philadelphia from Brooklyn and ran into Alex's grandmother who insisted he reaches out to her. Within weeks, they were moving in together, and the following year they were married in 2018.

The two both come from the arts Alexandra is a painter, while Jacob is a musician who spent many years performing in NYC on Broadway, as well as the sales world -- Alexandra in advertising, Jacob in Real Estate. However, the two have always had a dream: To build a company together.